On Saturday 2 March, the Samurai Hout Bay dojo filled with young hopefuls all trying to move up in their karate training to their next Kyu, or grade. 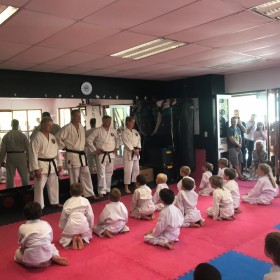 On Saturday 2 March nearly 60 young karateka gathered on the mat of the Hout Bay Samurai Dojo to try and earn their next belt, or kyu. Lead by Sensei John Shaw, and assisted by Sensei Aubrey Davies and other senior black belts, the group were put through their paces as they were tested on their understanding of karate fundamentals, fitness, focus and discipline.

Starting from as young as 4 years of age, these “paces” can oft-times be more amusing than challenging, but as always with Sensei John, there is respect for the practice of karate, while instilling a love for the martial art.

Eagerly supported by many, many family members, all successfully graded, and will hopefully still be wearing their belts proudly and ready to step up at the next grading.