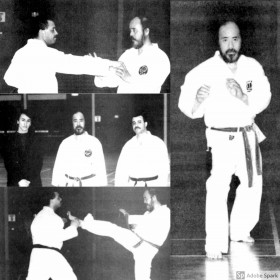 KEN HASSELL: Welcome to England again and thank you for your time so soon after your flight.

S.K.: Today (Thursday) until Monday then I go back to America.

K.H.: When and where did you begin your karate training?

K.H.: Was that with Tani Sensei from the beginning?

K.H.: Did you practice any other martial arts before then?

K.H.: Which was first and how old were you?

S.K.: Judo was first. I began as a child at ten years old then I tried Kendo.

S.K.: I always wanted to do Karate and there was a dojo close to where I was.

K.H.: Do you still practice Judo or Kendo?

S.K.: Not really but each one compliments the other, Karate, Judo and Kendo.

K.H.: What was it like training at first in Tani Sensei’s dojo?

S.K.: It was hard and I always did my best. There were certain ones who I admired so I would try to be as good as them, often trying to copy them. I just got on with things.

K.H.: Did you always do the same style?

S.K.: A good teacher with a lot of wisdom and foresight. As I developed and progressed he gave me more freedom to explore my own ideas.

K.H.: You have adopted a similar style yourself and at the same time the students maintain the correct etiquette and attitude.

S.K.: Yes. As an instructor you can be almost over formal for too long. I think there must always be some freedom when the time is right.

K.H.: In the dojo who else has influenced you?

S.K.: There are many — Mr. Tani for his wisdom and foresight. Mr. Fujiwara — he was very, very strong, strict and very scary. You would be afraid to talk to him and even afraid to watch a lot of the time. Mr. Kawata — for his kindness. He was very approachable and always had time for you. His technique was also very good. Mr. Takahara — he had perfect Ashi Barai — foot sweeping and throwing techniques. I always wondered just how he did it. Mr. Maeda — compared to the others he was much smaller so he seemed to train twice as hard, fighting the disadvantage. Mr. Fujiwara is now dead but to me he is always with me and always in my heart.

K.H.: Did you train with people from other styles?

S.K.: I trained with Okinawans sometimes but it wasn’t any particular style. It was just their karate so I always kept an open mind.

S.K.: Everything was realistic for survival. It was often anything goes. That type of training was the results for many kata which shows. I was also taught Nunchaku by one man and he was very strong with them. Then was 25 years ago yet many people seem to have the idea that they are a new weapon.

K.H.: When did you begin to analyse and take apart what you knew and what you had learned?

S.K.: It was after winning major tournaments. I remember one particular time when I won but I went away thinking to myself that although I had scored to win I felt that my technique could not have done any real damage. I went back from a sports approach back to roots, to basic principles.

K.H.: How long had you been training when you began this approach?

S.K.: Two or three years. Just when it seemed that I had achieved my main aim I had yet another step to take but Karate will always be like that. I’m still learning all the time. It’s most important always to strive to improve.

K.H.: What did you actually do when you started to break it down?

S.K.: I went back to the dojo where we put on the body armour and trained full contact. We then found out how effective we were. I had used makiwara up to then but we changed to the body armour because the feeling of impact was more realistic to that of a body blow than the makiwara. But you must use the makiwara. I studied sports science, body mechanics, the whole function of the body.

K.H.: Who did you turn to for the knowledge and advice on subjects that you weren’t familiar with?

S.K.: On the scientific side of things, I have a very good friend who has so much experience and knowledge but I got as many books as possible and it helped me 100 per cent.

K.H.: Had you ever been taught along these lines?

S.K.: It was a personal idea. I was fortunate that Mr. Tani gave me the freedom to pursue it. As well as hearing from other styles such as Shotokan, Goju Ryu and others, I watch how people in various sports moved and I studied how children and animals moved.

K.H.: Did you train with people from different styles then?

S.K.: No I just watched and practised. The only people I had trained with outside of my style were the Okinawans.

K.H.: Did you use anything else to improve technique?

S.K.: A mirror to check form and body action but not any more, only occasionally to check. K.H.: How have you yourself evolved with your style?

S.K.: We have learned much about what effects our training and exercises has on our body and I have tried to find ways to practice without causing unnecessary injury through our methods. The scientific approach is so valuable it has taught us much. The more I practice the more answers I find to my questions and so things become easier to explain to myself and to my students. I like to visit different countries to study their culture and way of life to understand more.

K.H.: What are your thoughts on Karate of today compared to the past?

S.K.: There were fewer competitions in the past and now it is often regarded as a sport not a martial art. It is an art, that’s its beauty. The Budo philosophy must be understood.

K.H.: There are always many arguments for and against when it comes to changing Kata. What do you think about this?

S.K.: The old Kata should he left alone like an antique and if necessary new ones should be made. If you want to improve a Kata improve yourself? The aim is always the same to have an effective technique and when you hit, to hit hard.

K.H.: What of the future? What is your advice there?

S.K.: There must be more understanding and concentration of the spiritual side of martial arts. The correct approach and understanding of martial arts can do much to improve society. For example right down to a basic punch the punch must be thrown to better the self each time, not with the attitude that it is learned to hurt somebody else. Many sports are good for making you stronger and confronting weaknesses, but martial arts go deeper than that.

K.H.: Sensei, thank you for your time.