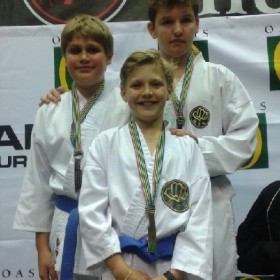 The South African KSI Championships on the 16th of September at the Wynberg Military Base was a spectacular event.  The SA Champs competition was a showcase for the karate talent which we have in the organisation. The students were a credit to their teachers and the hours of dedicated hard work and discipline that went into their performances was evident.

The SA Champs team from the Samurai Hout Bay dojo was no exception.  The Hout Bay students showed great sportsmanship and respect for their fellow competitors earning them 2 gold medals and 8 bronze medals.  After such a successful day, with many solid performances, there have been a group of Hout Bay students that have been invited to train with the South African squad in hopes of been chosen for the final South African team.  Final team selections will be taking place next year, where the team who will be representing South Africa in the next World Championships in Sweden next July will be announced.

We wish all the selected SA Champs Hout Bay students the best of luck for the training that lies ahead.  Their dedication and physical fitness will be put to the test at the SA squad training sessions and only the best will be selected for the final team.  It will be a difficult journey, but in the end one worth experiencing.  Please support this group in whichever way you can so they can be successful.  We will be tracking their progress throughout their exciting journey on the Samurai Hout Bay website.  Here is to exciting times ahead for the Samurai Hout Bay dojo and their path to Sweden.