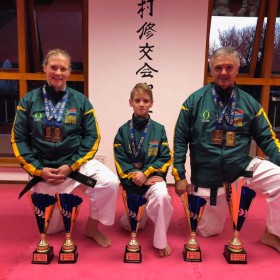 From a 10 member team 5 medals were won In total :
1 Gold medal,
4 Bronze Medals

For those who didn’t qualify as medallists, they too, showed massive improvement in their performances and through their committed training , we believe their future opportunities at another international competition will be imminent. Having been selected to represent SA and having had this experience, their future looks promising.

Cape Town will host the next KSI world championships in 2020 and the Samurai Karate Hout Bay  dojo will be better represented in numbers and experience.We have a very promising group of young athletes in mind for the 2020 world championships and we will do everything in our power to showcase their true potential.